News from the archives: a recent accession 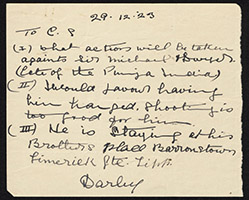 A letter, recently donated to the National Archives, was written to the Chief of Staff of the Irish Republican Army, in December 1923, by a man called Darley (presumably an IRA member) seeking approval for the killing of the former Lieutenant Governor of the Punjab, Sir Michael O’Dwyer, who was visiting his brother in Tipperary at the time.

Early in 1919 the Rowlatt Act extended emergency measures introduced in India during the First World War which included incarceration without trial. As a result tensions ran high in the Punjab and serious rioting had left several Europeans dead, banks and public buildings looted and burned and a female missionary seriously injured. On the 13th of April 1919, General Dyer, the acting military commander at Amritsar, ordered troops under his command to fire indiscriminately into a large crowd attending an illegal demonstration at Jallianwala Bagh, Amritsar, killing hundreds and injuring over one thousand. Dyer claimed he was quashing a potential rebellion. Sir Michael achieved notoriety through supporting General Dyer’s actions. A subsequent enquiry into the events unanimously condemned Dyer. He was relieved of his command and he died in England in 1927.

O’Dwyer, Dyer and the Punjab itself had close Irish associations. Michael O’Dwyer came from a large and moderately nationalist family at Barranstown in Tipperary. He joined the Indian civil service in 1885 and, through his own natural abilities, rose to the highest ranks of the British administration in India. He was a great supporter of the co-operative credit movement in India which helped free peasants from the yoke of moneylenders and he also supported peasant ownership of land.  He was appointed Lieutenant General of the Punjab in 1912.  A man of many contradictions, Sir Michael was an unashamed Imperialist but later published, in his retirement, a history of the O’Dwyer family extolling their resistance to British aggression in Ireland over many centuries. Reginald Dyer had been born in India in 1864 but was sent, at the age of 11, to Midleton College in County Cork and later briefly studied medicine at the Royal College of Surgeons in Dublin.

In 1913 emigrants from the Punjab to the United States were heavily involved in establishing the Ghadar Party, an Indian revolutionary organisation based in San Francisco which had, as its object, the overthrow of British colonial authority in India by armed revolution. It was quite similar to the Fenian movement established by Irish emigrants in the United States in the 1850s and it received the support of Irish republicans in America who assisted the Ghadars in an abortive attempt to send arms to India during the First World War, to precipitate an uprising there –  part of the so called Hindu-German Conspiracy.

The IRA did not act on Darley’s recommendation. When the letter was written the organisation was in turmoil. It had been engaged in a bitter Civil War with the Free State Army for over a year and the Chief of Staff, Frank Aiken, declared a ceasefire in April 1923 and ordered the dumping of arms the following month. While Sir Michael O’Dwyer survived the Irish Republican Army, he was assassinated in London in 1940 by Udham Singh, a member of the Ghadar movement who reportedly had been present at Jallianwala Bagh on that fateful day in 1919.

News from the archives: a recent accession