Behind the Scenes: meet our new archivists 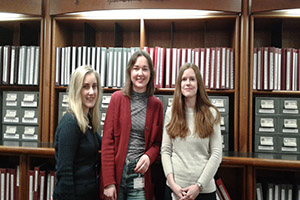 In the last few months the National Archives has welcomed three new permanent archivists to the team; Deirdre O’Connell and Suzanne Bedell, who are in the Public Services Division, and Eilís McCarthy who is in Archives and Government Services Division.

All three have extensive experience and have not only worked in a variety of repositories with a variety of archives but in different countries too. Deirdre for example has returned to Ireland having worked in Canada for several years at a university and Eilís spent eight years in the UK working in performing arts institutions including the Royal Opera House and Rambert Dance Company, universities including Imperial and SOAS, and helped to establish an archive in the East London Mosque. The National Archives isn’t entirely new to Suzanne who has worked with numerous collections including producing the catalogue for the property compensation claims ref. OPW 6

In their first couple of months here Suzanne and Deirdre have been getting to know our collections and how best to use these sources to assist our readers. They have already contributed to social media and assisted with the archive repository project. They look forward to helping people with their research, the diversity of the role and the new challenges ahead.

While Eilís has been learning about the training and assistance provided to government departments by the National Archives and the annual transfer of records.

All three have been getting their hands dirty assisting with the archive repository project – they have joined us at an exciting time!

Behind the Scenes: meet our new archivists