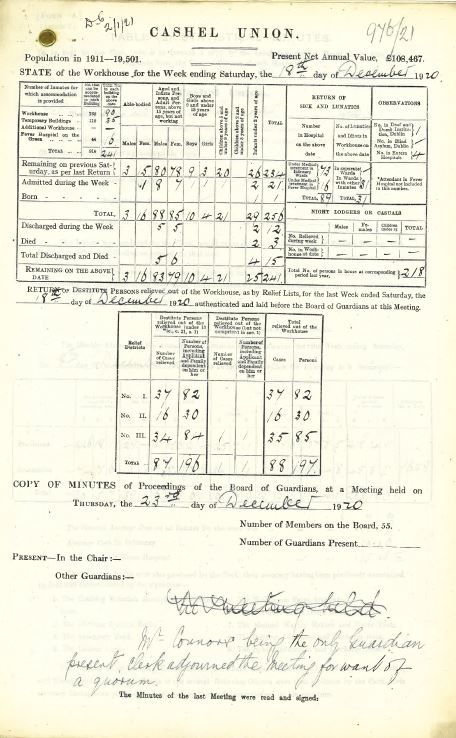 The National Archives is delighted to announce the fifth talk in its 2021 lecture series, ‘Dismantling the Poor Law system in Ireland’ online on  Tuesday June 29th at 7pm.

The lecture will be given by Senior Archivist Brian Donnelly and you can book your free place here.

During the height of the War of Independence, those Irish local authorities which recognised Dáil Éireann initiated the dismantling of the Poor Law system by closing many of the workhouses around the country which had been set up from the late 1830s onwards. This extraordinary development – the deconstruction of an entire infrastructure – was motivated by ideology and financial expediency and had far-reaching implications both for the people these institutions served and the communities in which they were situated. Brian Donnelly, Senior Archivist in the National Archives, will explain how this came about and what the long-term consequences were for Irish society in the first half of the 20th century.

Brian Donnelly began working for the Irish Manuscripts Commission in 1982 as Surveyor of Business Records locating, reporting on and arranging the preservation of records of historical interest. He became an archivist in the National Archives in 1993 and is now Senior Archivist in the Public Services Division. He has worked over the years on the records of many workhouses as well as those of their successors, the county homes. Brian has also written on the transformation of the Irish health infrastructure during the 20th century.